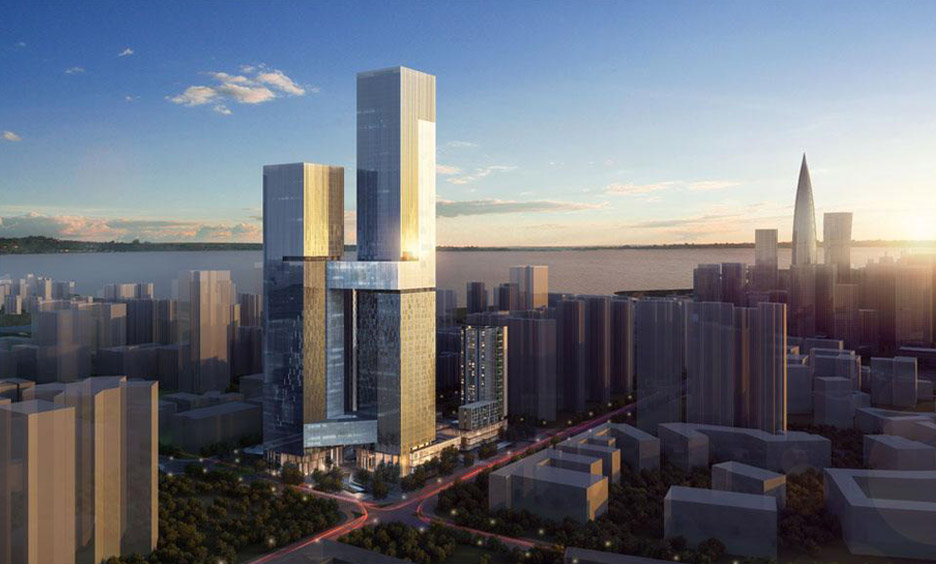 In an age of instant accessibility, armchair business meetings and the ‘global community’, the public meeting space might seem like an obsolete feature of modern life. The power of the public space in society may have diminished with the rise of digital communication but its value to society and individual well-being can not be underestimated. In ancient Greece, academics, philosophers and ordinary citizens gathered in vast public spaces, called Agora’s, to debate the issues of the time. Almost every civilisation since has created its own public meeting space. In Arabic civilisations, citizens would meet to discuss local matters in the Majlis. Through the prism of these public interaction spaces, modern civilisation, democracy and a unified concept of society first began to take shape.

Jump forward to modern day China, and a remarkable project taking shape in a former fishing town is bringing the interactive public space into the 21st century. The Shenzhen Bay Innovation & Technology Centre (SBI&TC) hasn’t even begun construction yet but the design has already garnered significant interest in the skyscraper and scientific communities. The project has been developed by RMJM Hong Kong, the Studio behind the iconic Zhuhai Shizimen Business Cluster Exhibition and Convention Centre and Phase 1 of the Heart of Zhuhai City project. With preliminary piling expected to begin in February 2016, SBI&TC looks set to establish a new benchmark in Shenzhen’s architectural legacy. We talked to Hong Kong’s Design Director and a central pillar of the project, Tean Chee Ko, about architecture and Shenzhen’s new era of design innovation. 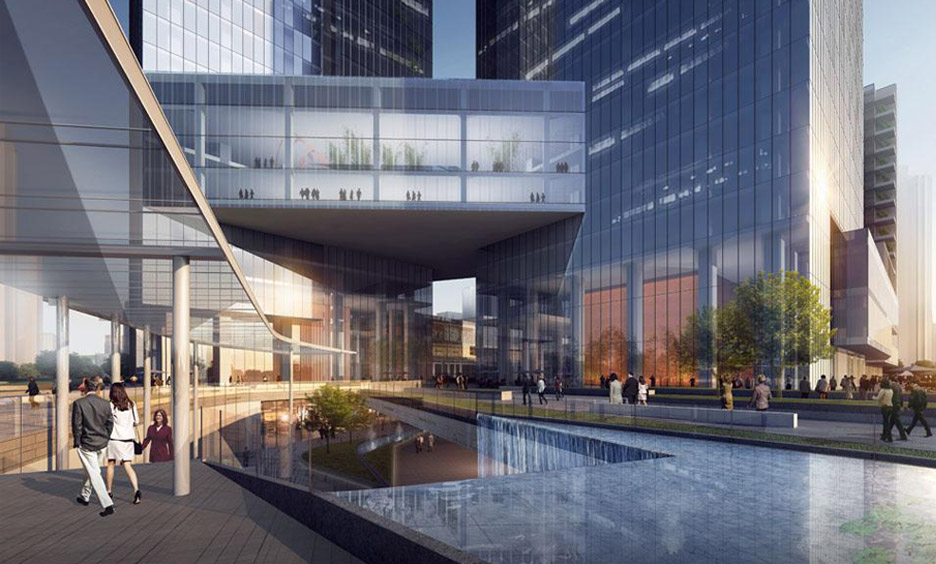 Design features
The complex spans an area of 40,000 m2, with a total of 381,529 m2 of GFA provided to accommodate various programmes within the pioneering project. The complex comprises 5 towers, the tallest two of which are dedicated exclusively to Research & Development. Following orders issued by the aviation authorities in December 2014, the height of the Centre’s two tallest buildings was reduced. Thankfully, the alterations meant both towers were shortened by less than ten metres. Of the two R&D towers, the tallest now reaches 311.1 metres above the surrounding landscape, meaning it will be one of the tallest buildings in Shenzhen upon completion. The other tower, meanwhile, rises to a height of 238.6 metres. 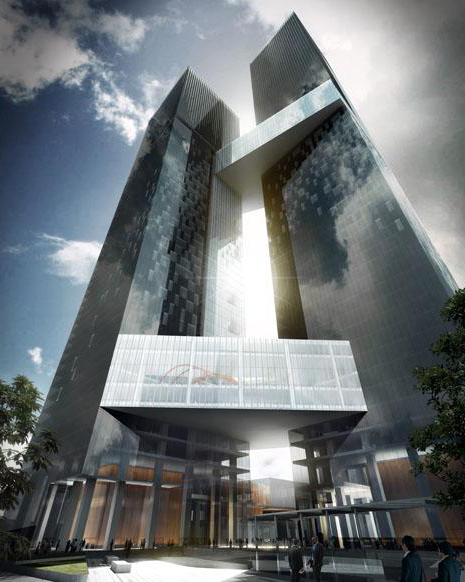 But the real highlight of the SBI&TC is in the ‘shared bridges’ connecting the R&D towers at two levels. The distinctive 3-storey volumes provide ancillary programmes and services, but are ultimately designated as “interactive social spaces to allow people in both towers to congregate and exchange ideas.” The glass curtain facade allows light to stream in, creating an open, naturally lit area. Architecture has the power to improve lives, but it goes beyond merely providing shelter. “Architecture can shape our lives and enable us to be more inspired, to be more interactive, to reach further” argues Chee. The building not only provides space for workers and the public to meet, the entire layout is designed to inspire debate.

The concept, Chee asserts, is based on “progressive development through innovation.” Warming to the theme, Chee explains “With hard work and innovative thinking a start-up company (in this case represented by the shortest of the apartment towers) will grow and develop into a mature business. As the business develops it will expand. In time, it will come to be composed of multiple units as its influence on the greater economy grows. In our proposal, the spiral of ascending volumes, culminating in the taller of the twin towers, represents this aspiration for progress.” 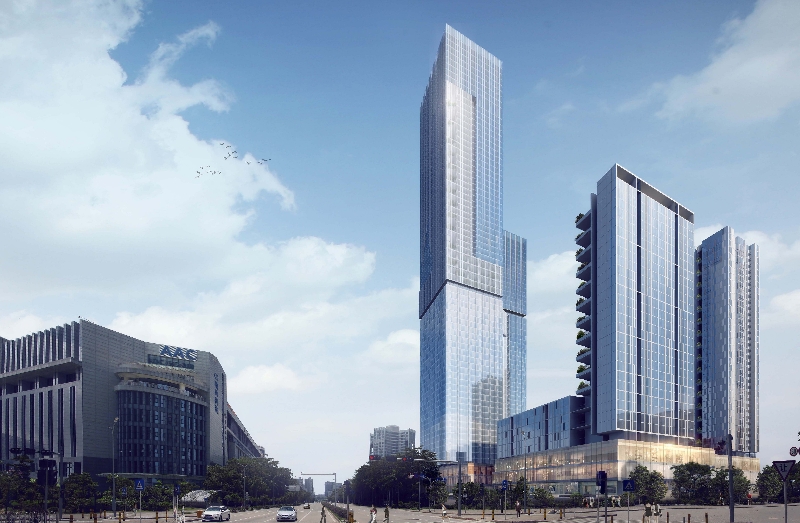 Innovation through design
The Studio didn’t leave a single aspect of the design to chance, with every element of the architecture, composition and construction laboriously considered. This meant studying weather patterns, creating detailed visual maps of the surrounding topography and producing precise renders to ensure the development fits into the Shenzhen skyline. “We used the data generated by the environmental studies to create an environmentally and culturally responsive facade” explains Chee. In doing so, the Studio could create a design capable of lasting 100 years or more, allowing the building to simultaneously adapt to the external environment whilst reducing energy consumption within the building.

The growth of new design technology has heralded a new era in architecture; an era whereby the impossible can become reality through digital composition. The project consultants, Inhabit, “used environmental software to study the effects of the sun and wind on the buildings and their surroundings. Buro Happold used computer structural modelling to allow us to propose a highly efficient structural system to span between the twin towers.” Just as the continued evolution of design technology allows designers to “explore numerous variations of the building’s form in an efficient way”, architecture itself can influence our relationship with technology. By creating a space conducive to learning, debating and sharing, new ideas can flourish and be integrated into the national dialogue. Creating the right environment
Fostering a nurturing environment means optimising every possible element of the design and considering any external factors capable of influencing the conditions inside. Chee illustrates the level of detail required for the towers’ facade alone; “The pixelated aesthetic is a representation of the varying solar gain conditions across the facade. Where an area of the facade was exposed to higher amounts of solar gain we proposed to use a more reflective type of glazing.” Not only does this ensure the R&D towers maintain a suitable interior atmosphere, it also saves money and energy on heating and cooling the building.

The layout of the development posed a number of design challenges, but Chee and his team saw an opportunity in the adjacent R&D towers. “One of the biggest environmental efficiencies achieved was set in place early on in the masterplanning process” explains Chee. “We used the inter-shading between the twin towers to reduce heat gain, so the placement of each tower allowed one to shade the other during the critical early morning and afternoon times.” Intelligent design is a recurring theme throughout the SBI&TC design, but this can be as simple as the clever alignment of towers. 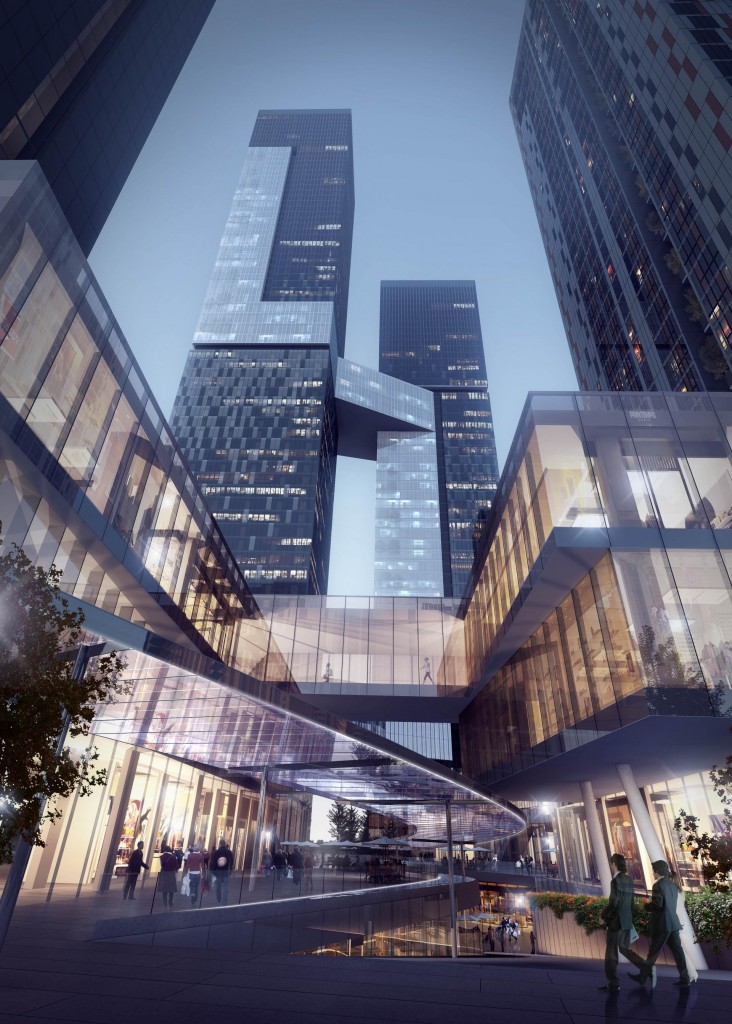 Unique design for a unique city
“At the early stages of the competition we recognised that we were designing a complex that was part of a network of related developments,” says Chee. The Nanshan district, in which SBI&TC is based, is composed of a unique mix of university buildings, R&D facilities and residential communities. “We wanted the proposal to reflect the two aspects of the district’s unique mix” Chee claims. A big factor, he admits, was “Continuity between the research being done at the universities and the work being done in the commercial R&D facilities.” Much like the shared spaces between the towers, the district itself offers a “natural next step for innovative ideas to become a commercial reality.” 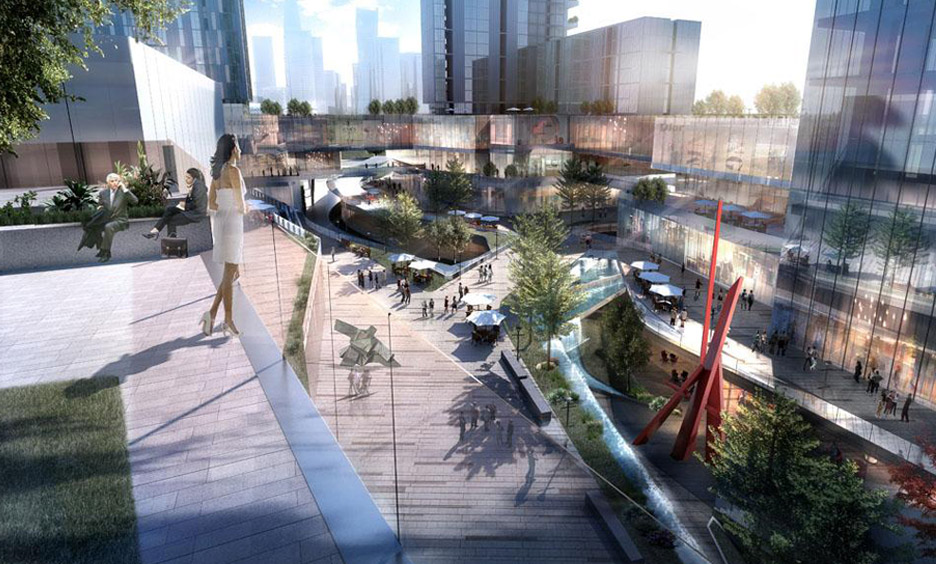 SBI&TC in Shenzhen
The design itself captures elements of the rapid trajectory of the city of Shenzhen. From its beginnings as a fishing village with a population of 25,000, the city has grown to astronomical proportions. At last count, Shenzhen boasted approximately 15 million inhabitants with a metropolitan-area population of roughly 20 million. The city’s dramatic transformation came after it was singled out to be the first of the five Special Economic Zones, due in large part to its proximity to Hong Kong. These SEZ’s were created in 1980 to act as an experimental ground to introduce elements of market capitalism, albeit elements guided by the ideals of “socialism with Chinese characteristics.” Shenzhen’s meteoric rise from small fishing port to an international business hub and new science capital of the world is echoed in the stepped towers of the Shenzhen Bay complex.

As such, it’s vital that the SBI&TC “responds to the future whilst remembering the humble beginnings of what was a small fishing and agricultural town” says Chee. “Shenzhen is now a modern and thriving metropolis. It’s characterised by its migrant population who came from all across China and built it up.” It is this spirit of entrepreneurship, argues Chee, that the development focuses on. Whereas the principal source of income in Shenzhen in 1980 was fishing and agriculture, today these industries account for around 0.1% of the city’s income. Today the city is one of China’s leading trade, finance, and R&D cities; an integral element in China’s growing manufacturing and export metropolis. The Studio understood it would be folly to forget Shenzhen’s roots, even as the city skyline reaches ever higher. Biggest challenges
Designing a multi-million dollar complex in the heart of a thriving new city presents its own unique set of obstacles. “One of the major challenges”, argues Chee, “is the vertical transport system (VTS-elevators).” Creating an efficient elevator system in buildings requires a complex floor design, but by optimising the floor space, investors can be guaranteed to get the highest return. “Supported by Parsons Brinckerhoff we worked out multiple configurations to find a balance between efficiency and economy” explains Chee, adding “the final configuration uses double deck shuttle lifts to drastically improve waiting times and capacities. These shuttle lifts bring people to a sky lobby from where they are connected to the high zone lift system.”

Just as the VTS layout challenge was overcome through collaboration and innovation, the design process for SBI&TC grew from bringing together some of the brightest minds in China’s rapidly developing design industry. The result is fascinating, imposing and brilliant. While the building’s design won’t single-handedly instigate new dialogues in the R&D community, it typifies the growing thirst for open discussion currently finding favour in modern China, aided by the growth of social media and online forums. Shenzhen Bay Innovation & Technology Centre signifies a new era of innovation, albeit one based on ancient principles. In this new era, the environment itself allows ideas to thrive and be shared, enabling not just scientific progression, but societal development too. 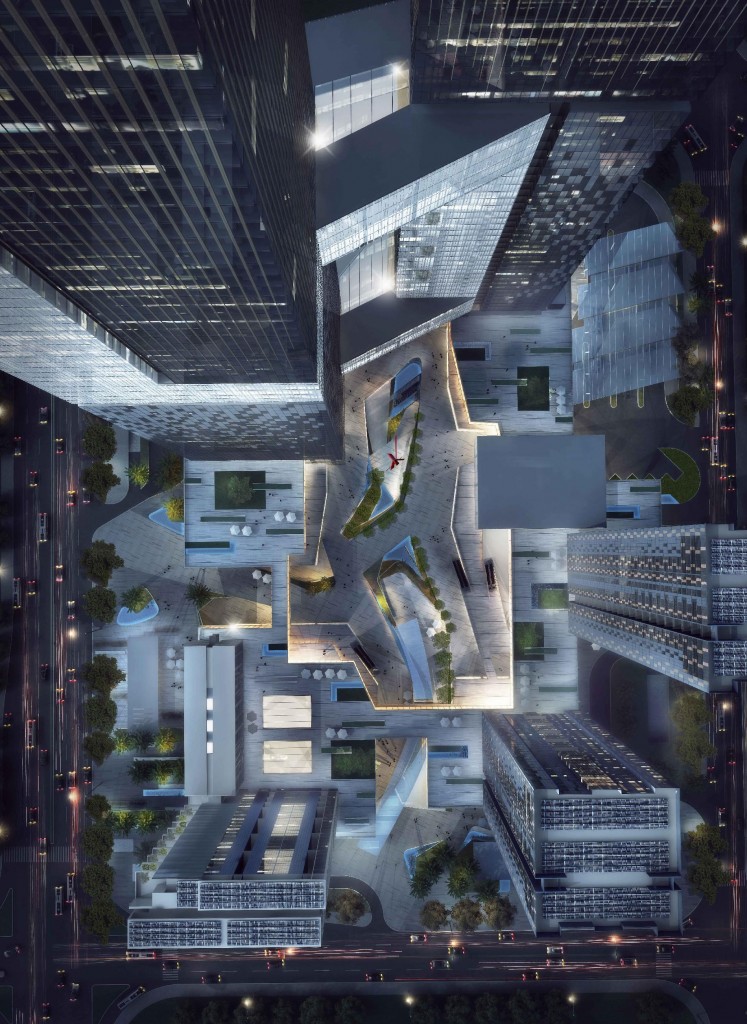